When I think about my painting I think about being moved by beauty and light, it’s not so much in the eye but in your minds eye that perfection can be found. We all respond to light and beauty throughout our lives and the response is the same for viewer as it is the artist.

A clear blue sky in the middle of the day will almost certainly illustrate a very different kind of emotion than say the light of a soft dark evening sky fading slowly into night. Our emotional life in my view is much stronger than our intellectual life. These new works on paper and canvas are my direct translation of this feeling of light and beauty, I?ve seen and experienced on my travels around New Zealand over many years. The light in the Pacific is much stronger than that of the Northern Hemisphere where I spent much of 2015-16 as the resident artist at Winchester College in Hampshire UK. The colours are deeper here in NZ and resolve on the horizon line or Keyline, as I prefer to call it much quicker than in the UK. The surfaces below these colours, in this new work I have pushed as far as I can almost to the point where they have become tactile texture scrubbed on rather than brushed and then scrapped back to expose the original under painting of the final image. It is here that the viewer can have a real sense and feeling of the subtle interplay of strong colours, natural light and the distant and ever significant horizon line where the sea meets the sky. 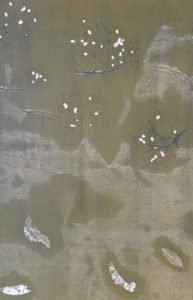 The Beech at Lake Ohau series arose from my desire to highlight the effects of deforestation on the South Island and to draw attention to our responsibility to carefully protect the forest we have left.

My trip to Lake Ohau and Hokitika was funded by a Pollock Krasner Foundation award ( for which I am very grateful ) and this allowed me to fully investigate what is now an area with minimal afforestation but where there used to be heavy beech forests. Our current assumptions about what is a natural environment are falsely based on what we see now.

I had read about Nathaniel Chalmer?s journey into Central Otago in 1853 via the Nevis Valley where he described an area which had suffered greatly by fire ? ? the plains were treeless, though the charred tree trunks showed it had once been well timbered.?

My work emphasizes the visual impact of deforestation by depicting the sparse tree cover with images of the remaining beech trees interspersed with dead leaves to indicate the gradual demise of the natural landscape in the hope that with focussed attention on this issue we might reverse the current deforestation trend and thus allow us all to have a more beautiful and ecologically balanced environment in which to live.

I am grateful to those people who assisted my research and shared their knowledge with me , in particular, Di Lucas, Neill Simpson and Maria Martin Smith.