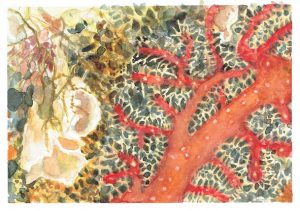 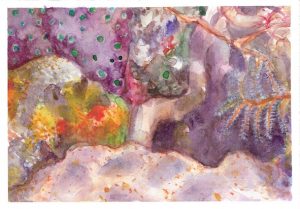 I have come to the realisation that my artistic practice is driven by the complete unpredictability of my painting process. I find it really exciting that there is no certainty of outcome when I impulsively experiment in an effort to discover how the paints and mixed media might react with each other. Sometimes I veil parts of the painting or abrade it back thus deliberately disrupting it in some way and in doing so creating a palimpsest for subsequent layers.

In my previous exhibition, Soundings (2018) the initial spur for me was El Mundo Submarino, a small book of photos from the world under the sea. That book highlighted species of sponges, corals and other amazing little sea creatures that have been used for therapeutic drug research and are now in great danger because of the threat of climate change.The paintings in my current show, Soundings Too, have moved on from my vision then of these internal seascapes, and instead are moving towards more abstract allusions that express my everyday actuality and metaphorically plumb the inner depths of thoughts and emotions. 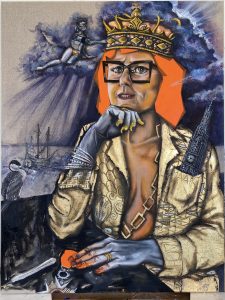 I am a 5th Generation New Zealander of French+Scottish descent and a Portrait Artist of the New Zealand Femme. My central concerns are representing women through Portraiture in national identity and belonging through the collective of Us and the individual. By paying homage to women of standing and strength in our cultural, political and arts sector, both historically and current; I empower and freshly reinterpret the New Zealand Femme. Following in the steps of ‘The Group’ Evelyn Page and Rita Angus started, I intend to keep up the challenge and highlight the tension and disparity between the failed, imagined ideals of past romanticisms in New Zealand Portraiture and what is presently real.

Each Portrait begins with a contemporary photographic ‘sitting’ and then through intensive personal research, I represent the sitter as a ‘Femme de Force’. This constitutes the sitters life lived; using genealogical and personal symbolism, present tensions, a personalised palette/Aura and a strength and spirit reflected in the pose with the gaze met head-on. As Justin Paton so eloquently put it ”when we look at a portrait were seeing the a painted ghost of someone who’s no longer in the room” and one of the best reasons to paint a portrait, often overlooked, is they need to be remembered.

The processes and materials used consist of a transparent gesso; loosely painted drawing in of the figure and background compositional structures and symbolism. Using Oil on raw reverse stretched Belgian Linen- painted gesturally at first, I then move in a more considered slower way, utilizing light, form and shadow, resonance and strength; refining and building the emotional surface of the linen.

To me, Portraiture is deeply personal, an emotionally resonant and connective experience; it’s not a passive thing. When you see a portrait painting, it’s like slowly and intimately meeting another person. My vision is to paint the essence of the woman; the presence of her strength that is particular to her. An authentically complex, psychologically and physically conceptualised woman; one who becomes a performative, painted vision that I see, feel and hear – that they may not see in themselves.

I want the viewer to feel familiar but challenged within the final representation, constantly finding fresh interpretations that surprise, resulting in a true New Zealand ‘Femme de Force’.”