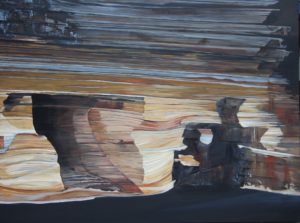 The New Zealand landscape is particularly active where tectonic forces continually shape the land as do the erosive effects of a boisterous climate. The land is constantly rising and falling which is evident everywhere particularly in areas where erosion strips away the land surface exposing its underlying geo ? musculature. It is this interface which is of interest not only because it tells of our country?s origins, but also that of contest generally. The raw rock face further underpins the inherent contradiction between what is apparently solid and hard while harbouring the propensity to dissolve due to the unrelenting onslaught of what is liquid and soft ? namely wind, water, snow and ice. Comprising oil, acrylic or other mediums all paintings are of course essentially liquid in origin, as was the depicted rock at some long dim distant point in geological time. It?s as if the rock is made of paint and the paint made of rock, which has the effect of conveying apparent plasticity. Indeed, many paint pigments are sourced from rock. So in this regard the paintings record the mineral origin of paint.

In a sense we as individuals are faced with similar contests arising from the simultaneous effects of growth and inevitable decay ? that is, inescapable entropy being one of the fundamental laws of the universe. Similarly we, like the earth, are subject to these very forces which are beyond our control. And often where these are exposed a terrible confronting beauty finds expression. The Wikipedia entry on entropy perhaps best sums this up as:

?The increase in entropy accounts for the irreversibility of natural processes, and the asymmetry between future and past.? That is essentially what?s on show. 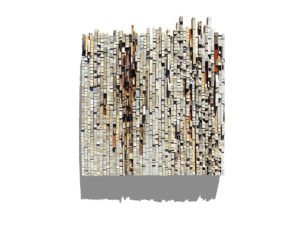 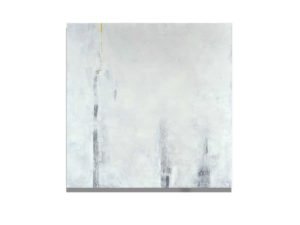 LOCKDOWN SERIES 25320201159?is an exhibition of works created during the unprecedented Covid-19 lockdown of 2020. An existing line of work begun prior to lockdown, for this exhibition, was abandoned in favour of new thinking, adjusted life and different inspiration.

All of the work created is repetitious, it is reminiscent of the repetitive thought patterns of my head. With thoughts slowed and headspace created, my mind moved to a blank canvas, a palette of grey and whites, a return to basics.

The neutrality signifying a de-cluttering of both mind and practice.

With mark-making at the forefront, white panels were etched and drawn into using multiple layers of plaster which were sanded and etched back to reveal a history of marks. A lot of the marks are repetitious, vertical lines, fence-like, contained, hiding behind them, markings as well as thoughts created during time imprisoned inside home and head.

The vertical lineage was carried through to wooden works. Wanting to make use of existing reclaimed materials from my garage, I cut and assembled creations using the same neutral white tones but accenting with colours seen from the deck of my house every day, in particular, the sunrises. They are variations of each other, referencing off one another.

The sombre grey images are abstract but more representational of my thought patterns. They are a balance of shapes and soft neutrals, sombre yet calming, reflective of my mood in the lockdown period. Being apart from the city, it was always close to my mind and an early morning escape to capture the emptiness of it was well rewarded by the presence of fog which perfectly created a haze or barrier to the images that was so apt.