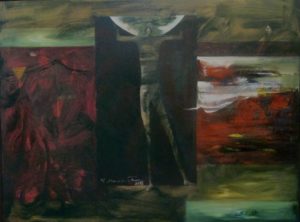 Editing images, altering and adjusting the view, is how we present ourselves online. My paintings are changed by the constant review of an image using computer programmes. I use editing tools that subtly alter the colours through filters and adjust contrast and tones of the photograph of the unfinished painting. I then return to the painting with new information. And with the act of painting there is constant reviewing and editing as I search for an idea, change?it, or dissolve it into the background before sweeping it back into focus, to charge it?with emotion or pare it down.
Phrases and terms of social media groups are loaded with powerful meanings as they drive at our desire for connectivity and meaning. We are called to action our thoughts: What?s on your mind? We are prompted to share, Search, memorialise, categorize, and to save as. These prompts are there to persuade us to act in groups and cohesively within the social media framework. I use these well-known prompts as a lead into my paintings and load them with my own meanings. What do I share? What do I save to memory? The painting ?Save as? depicts a collector of shells holding up a queen conch shell. Save as refers to keeping nature intact in a sustainable environment.The title of the painting ?Location history? refers to the coast, which was part of my childhood.

Another title of a painting ?Report a problem? refers to the Me too campaign which spread worldwide as a movement through social media and these two friends look out to the viewer as if asking to be heard.

Active pursuit of meaning is encouraged of our online selves as we mine for meaning, sift through our own and other people?s contents, revealing personal histories. As we reveal more of ourselves on the other hand we also guard our privacy.The same thing seems to be at work subconsciously and consciously when I paint as meaning suddenly arises to be lost sometimes instantly and then to arise again. It?s as though observation changes the thing itself. Social media promotes observation, and invites inspections. A painting expresses a language of its own, saves a moment, reveals what was hidden. The observer brings to a painting an interpretation based on a different set of experiences and the original meaning of the painting is changed. In the process of painting I sift, collate, select, delete, save as, share to you to view as. 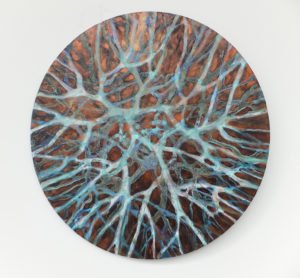 My initial inspiration for Soundings has been a small Spanish book packed with depictions of the the wonderous undersea world. Aptly titled El Mundo Submarino (The World Under the Sea ) this book highlights species of sponge, corals and other amazing little sea creatures that have been used for therapeutic drug research. In recent times the huge threat such sea life has started to come under pressure due to pressing problems like global warming and the huge and indiscriminate use and abandonment of plastic. While these issues are important to me they are not the only reason for these paintings.

Originally these photos grabbed my attention because of interesting shapes, colours and possible textural detail. But in reality these found images provided a neutral launching pad for my paintings. The first works were detailed and somewhat literal interpretations in watercolour of particular scenarios that caught my eye. However, images after the initial depictions became more abstract and started to take on a life of their own.

The small circular Treasure pieces and the larger work I can’t see the wood for the trees have grown out of explorations since my exhibition Reach Out (2012) where I have attempted to capture the essence of regeneration in an organic and abstract way through the unpredictability of the painting process. Often I seem to have unconsciously and obsessively gone down the path of the organic, dendritic forms that are so crucial to the natural and biological world, amongst them tree forms, brain synapses, vascular systems, the pulmonary system and electrical charges.

The painting process continues to be an ongoing preoccupation for me – the unpredictability when you start with no certainty of outcome as you experiment with how the acrylic paint and mixed media react. I add paint and other media but also I’ll often submerge a layer with gesso. I veil things or I’ll take sandpaper and abrade it back a number of layers or deliberately disrupt the painting in some way. The very name of the source book – El Mundo Submarino – seems to hold meaning too…not just literally but also at a personal level. Maybe the idea of a deep mysterious sea world metaphorically parallels the unplumbed and unknown depths of our inner self?

Dorothy Helyer was born in London, England but since the age of eight has lived in New Zealand. She has always drawn and painted since childhood. Music too has played a very important role in her life. After initially completing a B.A. in Anthropology from University of Otago, Dunedin, she taught for some years before embarking on a Fine Arts degree at University of Canterbury School of Fine Arts in Christchurch in 1995. She completed her BFA, BFA (Hons) and finally in 2001 received her MFA (Painting) with distinction. Since then she has been a full time artist living in Christchurch, New Zealand where she works and she has exhibited nationally and internationally.