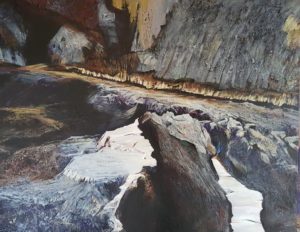 Origin of the world

These works simultaneously portray the world recorded in rock where it tells the story of its origin and history. When we look at such features we might ask the question: what happened here? They also record the origin of paint, given that most pigments are derived from minerals. So I like to think the rock is really paint and vice versa. Thus the birth of painting is referred to, given our distant ancestors used it both as medium and ground.

In Germany my friend Stefan Kronauer (the architect) would sometimes joke with me a certain architects quote : ? Wenn man nichts weiss, fang an mit dem Kreis? ? transl. ?when you know nothing, begin with a circle?. In my case it?s the sphere, the prime form. I excavate and play with combinations of geometry and scale. Bubble stacks, elemental stacks on the atomic scale to the morphology of organic growth within pollen grains, spores and radiolarian structures.?

A garden of evolving spheres overseen by one of my semi realism figurines and watered by some other older works of mine ?Watershield?, ?Flow? and ?Corm 1?

Andrew Craig?s paintings of rock and crevice serve as a good foundation to begin these life processes.??? 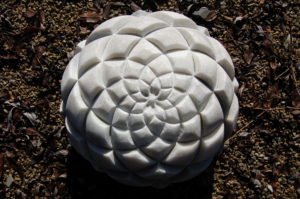 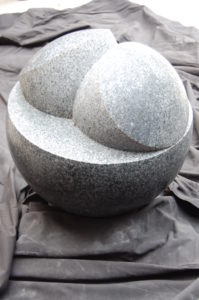