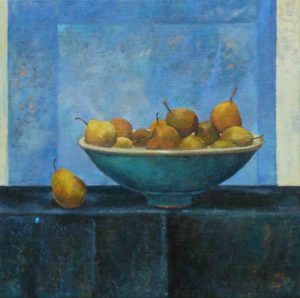 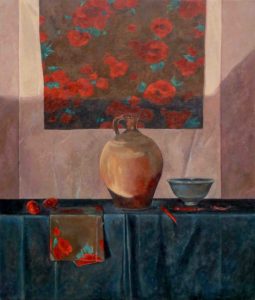 Born in the Netherlands in 1956, New Zealand based artist Siene de Vries studied painting and sculpture at the Academie voor Beeldende Kunsten Academie Minerva, in Groningen from 1976 till 1981. After leaving art school, Siene established a career in Holland as a painter of portraits, still life and landscapes, exhibiting in a number of solo and group shows in the Netherlands, as well as Germany and Switzerland. During this time he was also involved in teaching, both privately and at art institutions, and was instrumental in organising several local arts festivals.

In 1988, Siene, along with his wife, printmaker Saskia van Voorn, and their two young sons, made the move to New Zealand where they settled on a small farm in Banks Peninsula?s beautiful Le Bons Bay. Siene and Saskia have lived and worked on this property for thirty years, where their rural lifestyle and surrounding environment has become an important feature of both their practices.

Sienes work is largely figurative, although some abstract tendencies emerge from time to time. His practice continues to be characterised by an interest in the realist tradition, embracing subjects such as landscape, still life, portraiture and the nude. Siene paints mainly in oils using broad brush strokes, which are often augmented by finer, more detailed areas of work when necessary. His sculpture tends toward the gestural, where evidence of the modeling process remains in the cast bronze. In recent years his bronze sculptures have dealt with themes relating to the human condition in a socio-political context.

Siene’s work is held in collections around the world, and he regularly exhibits in both New Zealand and the Netherlands.