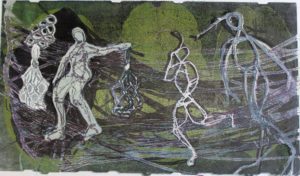 I was introduced to harakeke, NZ flax, in my late teens, and was fortunate to then meet and work under some of Aotearoa’s top weavers. I pay particular tribute to Heeni Kerekere, Erenora Puketapu Hetet, and Emily Schuster. From these dedicated and talented women I learned about respect for another culture, the environment, and especially respect for a plant.

I graduated with honours in Sculpture from Otago Art School in my early 30’s, making large installations with waste plastics. I then began working towards an environmentalist art using natural materials, referring more to my own culture and attempting to be less reliant on the Maori traditions I had been trained in. Practically rather than theoretically I have been working within biculturalism, while simultaneously attempting to integrate a feminist craft ideal within contemporary sculptural practice, all as an ode to the land.

My collaboration with AGResearch and the Biopolymer Network began in 2010. Since then I have been making sculptural work utilising the industrialised harakeke and epoxy resin processes they have developed. (As an alternative to the glass fibre in fibreglass, they are developing uses of harakeke fibre with resins, as it is far more sustainable and is recyclable.) Finger weaving and plaiting techniques work well with this flexible material. Rigidity can be achieved by using gravity or tension as I introduce the resin. It is like drawing in space.

The printmaking has been going on quietly for years but the idea of printing from my harakeke forms and figures is new. I experience the making as arranging forms within a field, and then applying the colour in layers, like painting with the press. My cast of characters and symbols come together in different relationships and compositions, always moving a little as though they were (still) alive. The field of operations, the ground, is an old cataloguing plate from a body imaging machine (XRay maybe, pre digital) and is a tiny fragment of the growing mountains of the newly outdated, and is my metaphor for regressive progress.

The harakeke used in these printed figures comes from my own pa harakeke, and the varieties used are Awahou and Tapamangu.