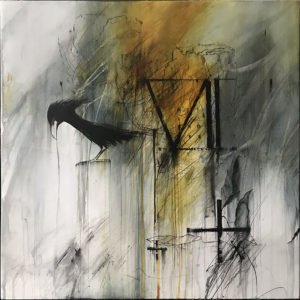 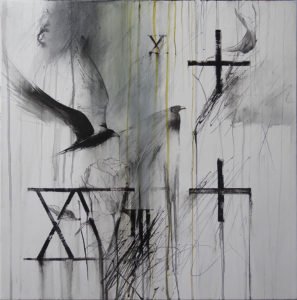 Many believe that abstract art is all about the spontaneous gesture, made with no thought, a blob here, a drip there, dumb, irrelevant, random, found, childish or even banal marks that convey. what? Oh come on, we hear. What is that even supposed to be!?There may well be cause for question, abstraction has always raised the hackles, but abstraction isn’t something new, it’s been around the block, invented, reinvented, aped, ridiculed, mocked both by others and itself, but time allows us to sit back, sort out the lazy from the luscious, the cerebral from the cloddish. Serious painters working in an abstract i.e. non-representational way, believe the marks they make are very representative, both of the world they live, and the one we inhabit.

The gesture, be it such a slight line it makes us wonder where it came from, where it will go alights on our subconscious like a whisper, but it may also be a fully formed gouge of such intensity that it cuts right to the heart of our deepest fears and uncertainties. Abstraction does this, it is silence and shouting, from Jackson Pollock to Agnes Martin, from the noise of the New York bar to the silence of the New Mexico desert. So is the abstract artist really communicating something without using something recognizable, and how so?

Kathy Barber is a dedicated abstractionist. From the beginning she wanted to express an inner tension, a thought process rather than an impetuous action. Broad arcs of colour dissected her canvases making us think of hilltops hit by some fantastical but controlled aurora borealis, dark rainbows against an even darker sky, portents of a coming storm. The paintings had a mature elegance while retaining something less learned, something absorbed, elemental.

When an artist approaches their craft with an inner dialogue driving the image, it cabecome didactic, preachy, a visual nervousness that is often evident in self-conscious literature. Abstraction can often be speculative, the artist is after all exploring both the gesture and the reason for making it; hand and brain are in constant dialogue, often arguing, sometimes agreeing. Thoughts are often ahead of the hand, trying to guide and control it, at other times the hand creates something that the mind has to catch up with, try to make sense of. Barber’s studio is full of voices, sometimes they are asked to be quiet, turned to the wall, tried to be made sense of.

It looks like Barber has been inspired by other artists, Elsworth Kelly, Cy Twombly, Brice Marden, Japanese calligraphy, and certainly a favorite Yayoi Kusama, not so much by the actual marks or colours, but by the thought processes. With over twenty years of practice, she has managed to make something entirely her own, a continuous body of work that has claimed a quiet place in collections and competitions within NZ and Australia. The key to her success lies in her control of surface effects, layers that hint at thoughts, conversations barely heard, suggestions to the head and heart. The breakthrough came with her solo show Chinese Whispers, here she successfully managed to convey that sense of intrigue, the paintings circled the gallery with the almost audible sound of their own language. The continuity of colour and marks was visually similar, but by the end you knew every painting was different, every message unique. The colours were joyous, pinks and reds floating beside yellow balloons, but something was happening, there were hints that the conversations were changing, perhaps they were just too bright, to loud, too cheerful to be sustained. Every party needs a few dark moments, every hill a shadow.

Brice Marden absorbed a number of influences during his extensive travels: the art and culture of Asia informed the calligraphic gestures that later emerged in his work. Elsworth Kelly cited the streets and shadows of Paris as an inspiration. Agnes Martin?s work is homage to the landscape of New Mexico, its flat plains, horizon lines, bleached colours. Brice Marden wrote: “My work has always been involved with nature, no matter how abstract. Sometimes it’s more formal and less involved with the real world. But there’s always been some sort of involvement with nature… this particular observation.”

Good painting is as varied and multi-layered as the person who made it, the thoughts and memories, the visual associations and personality of the artist, the sympathies and experiences all feed into a work. To reduce all of it to a single word runs the risk of doing the painter a disservice, even if the painters have chosen the word themselves. Barber has chosen a word, Y’gen, the Japanese word, which is at the core of the appreciation of beauty and art in Japan. It values the power to evoke, rather that the ability to state directly. The principle of Y’gen shows that real beauty exists when, through its suggestiveness, only a few words, or few brush strokes, can bring to mind what has not been said or shown and hence awaken many inner thoughts and feelings.

“Y’gen is to watch the sun sink behind a hill, to wander on and on in a huge forest without thought of return, to stand upon the shore and gaze after a boat that disappears behind distant islands, to contemplate the flight of wild geese seen and lost among the clouds.”

This power to evoke, rather than state directly, is at the heart of Barber’s sustained painting career. The paintings in Y’gen have their beginnings in Japan, specifically on the small island of Naoshima, that startling art and architecture destination. Naoshima’s transformation into a unique art project began in 1987, when Soichiro Fukutake, the chairman of Fukutake Publishing, now known as the Benesse Holdings, Inc., purchased the south side of the island. Mister Fukutake supervised the development of the spectacular galleries, buildings and museums over the next two decades. Anyone who goes there is changed forever. That’s easy to say, all experiences change us, but great art has an innateness, a mystery that invites us to experience change. For an artist, especially one who has sympathy for the transcending experience, that artist leaves with something indelible, but while impossible to remove, it is almost impossible to recover.

My painting is a response to place.

The power to evoke rather than to state directly has always been at the heart of my abstraction.

Y’gen is a Japanese principle suggesting that beauty exists when it is suggested- a few words, a few strokes can bring to mind that which has not been said.

This body of work has it’s beginnings in Japan.- a country of contrasts, a sensory overload of chaos and calm. After my second visit in 2015, I was overwhelmed with memories, images and experiences. It was some time before I could process the overload; to let the needless drift away and see all that is left behind. The opening sentence of a story.

The process begins- Looser scripts and scratchings interplay with colour and light specific to place. Thoughts jumbled, overlapped- erased. There is something comforting in the repetitive process of writing over and over, in the transference of thought weaving in and out of the canvas. My mark making is exacting, controlled and layered, repetitive characters become abstracted forms – areas dissolved and pared back as the unsaid becomes as relevant as the spoken.

I believe when we are in environments that challenge us emotionally or physically we are opened up to inner conversations and monologues. These experiences feed into my practice and Japan is just one such exciting influence. The challenge lies in translating my response to the canvas.