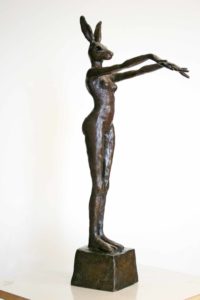 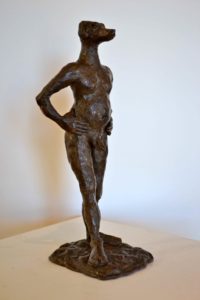 As an artist I enjoy responding to various forms of narrative: My sculptures are inspired by my childhood, human affect experiences, myths, legends and fairy-tales.

I love the quirky humor often characterized in surrealism, this is evidenced in the animality of my figures and objects, and in the titles of my work.

My book Twinny, was created for an autobiographical show in 2014 at Whitespace. This wee childhood memoir features stories of rather twitty twinnies growing up on a farm amidst animals and ballet practices in South Canterbury, NZ. Within the book are sketches and sculptures developed in response to the narrative. Some of the sculptures are in this show.

The bronze and ceramic works featured in Studio Tableau have been created between 2011 and 2016. The bronzes are originally created in wax, and cast in bronze by Jonathan Campbell in Wellington. The porcelain works are individually hand built, fired and glazed.

In 2011, I completed a Masters in Painting at the University of Canterbury. Since then I have been working from my Christchurch studio, exhibiting in Melbourne (Anita Traverso Gallery), Auckland (Whitespace Contemporary Art) and Wanaka, (Gallery 33). I have also contributed to a number of group shows throughout New Zealand.

This is my first public show in Christchurch since the Brooke Gifford Gallery closed as a result of the earthquakes.

Research in relation to developing programmes in Art/Design at high-school Level
Research and writing 11,000 word Essay for book produced for Honours in Design, 2004 Writing of autobiography for self published book titled Twinny for show, Twinny, 2014