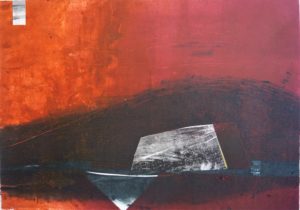 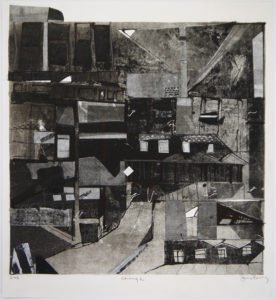 I am a printmaker based in Christchurch. From 1995-1997, I studied at Christchurch Polytechnic, completing a Diploma in Art and Design with a double major in printmaking. I work from home where my press and workshop are.

My practice as a printmaker involves Drypoint engraving and Monoprinting onto Perspex plates. These are printed through the press, producing original works on paper. Images are further embellished off the press with other media and applied techniques ? hand/press printed rice paper, chin-colle, graphite pencil and Indian ink. I try to pay attention to mark making, composition, blocks of pigment, collage and elements of drawing in my work.

Much inspiration is derived from land, sky and seascapes – the atmospheric quality the powers of nature give these and the emotional feelings these places incite. Other times imagery is depicted figuratively, and more recently my work has taken on an urban derivative. I have been an exhibiting artist for 18 years. 7 of which were with The Centre of Contemporary Art in Christchurch (CoCA) quite literally, up until the Christchurch earthquake in February 2011.

I love working with this medium. The combination of paper, ink, press and invention. I like the tactility and the unpredictability and surprise that are lent to working with the printed image. The ability to move on consistently and the changeable variety that comes with working with one off images, suits me as an artist.

My work is held in private collections throughout New Zealand, Australia, America and the United Kingdom. Work of mine featured in a limited edition book of prints, a public collection involving twelve other printmakers entitled ??Twelve laments and one?? is held by the Christchurch City Art Gallery.

-2015 ?Designed the artwork for the album cover ?Weightless? by singer/songwriter Sally Stockwell

?To the Islands?, ?Tourmaline?, ?The girl green as elderflower? and ?Visitants?.