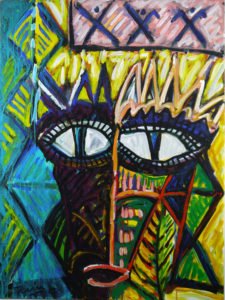 Feu’u grew up in the village of Poutasi in the district of Falealili in Samoa.

Feu’u emigrated to New Zealand in 1966. He has established a reputation as the elder statesman of Pacific art in New Zealand.[1] Feu’u has been an exhibiting artist since the early 1980s and became a full-time artist in 1988.

Feu’u was appointed a Honorary Officer of New Zealand Order of Merit in the 2001 New Years Honours List.[2]

Feu’u’s work was included in two groundbreaking exhibitions of contemporary Pacific art: Te Moemoea no Iotefa, curated by Rangihiroa Panaho for the Sarjeant Art Gallery in 1990 and Bottled Ocean curated by Jim Viviaeare, which toured New Zealand in 1994-1995.

Feu’u was part of the major group exhibition Le Folauga: the past coming forward – Contemporary Pacific Art from Aotearoa New Zealand, at the Auckland Museum.[3] Le Folauga later toured to Taiwan and became the first exhibition of contemporary Pacific art from New Zealand to be shown in a major fine arts museum in Asia.[4] Le Folauga opened at the Kaohsiung Museum of Fine Arts in Taiwan from 13 December 2008 to 5 April 2009.

While primarily a painter, Feu’u explores a range of other mediums including bronze, wood and stone sculpture, pottery design, lithographs, woodcuts and glass works (both stained and etched).

Feu’u’s work is inspired by Polynesian art forms such as siapo (tapa cloth), tatau (tattoo), weaving, carving and ceremonial mask making.[5] In these forms he uses a rich lexicon of motifs and compositional structures. His works frequently blend traditional and contemporary elements, incorporating a range of influences, inspirations, techniques and motifs from Samoa and Aotearoa and more generally from Euro-American to Pacific cultures.[6]

Fa’asamoa is the unifying element of Feu’u’s work. The term fa’asamoa is generally defined as ‘the Samoan way’. The social structure of Samoan society is held together and actively maintained by an adherence to unwritten but understood cultural conventions embodied in fa’asamoa which binds family networks to traditional customs and ceremonies.

Tautai, an organisation of contemporary Pacific artists in New Zealand, was founded in the 1980s as an informal network from an initiative by Feu’u and artist friends. This group shared a goal of mutual support for the promotion of Pacific visual art artists, at a time when Pacific art was in the very early stages of recognition as a particular genre.[7] In 2005, Tautai celebrated its 10th anniversary as a formalised organisation. Members include other established Pacific artists such as painter and sculptor Johnny Penisula, multi-media artist Shigeyuki Kihara and Michel Tuffery.