Sorry, this artist has no work listed just yet. 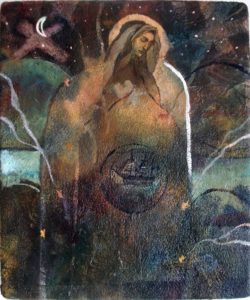 I have been a painter for twenty years, I live in Northland and exhibit regularly in New Zealand.

The intention of my work is to reveal some aspect of what I see as the dazzling darkness of Divine light. I have been increasingly interested in low art religious imagery, with it’s emphasis on emotion and sincerity to communicate devotion and belief. Catholic images derived principally from the Baroque, have always had a powerful impact on me personally. My own work deals with these images, dissecting the imagery to unveil the fight within, aware also of my place in an Aotearoa, with it’s foundations soaked in Maori and Christian spirituality.

With my own work I have wanted to transcend metaphors and symbols. The eyes of the viewer, with the faith of the artist, combine to birth a reality that incorporates a metaphysical reality, beyond the surface of materials.

This is my exploration and intention, using the narratives from the Bible, Catholic prayer, Maori mythology, and my own personal faith .

Sorry, this artist has no exhibitions listed just yet.