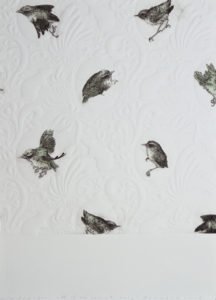 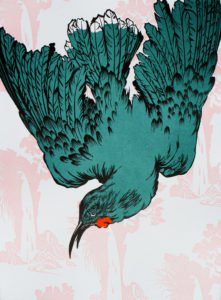 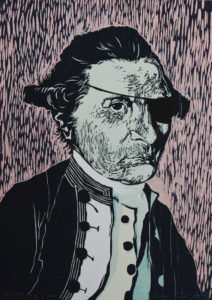 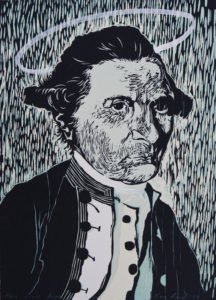 Ben Reid is a Christchurch-based printmaker whose work draws together specific references to our history of settlement of the natural environment within the wider context of the conservation movement. Providing subtle, yet pointed, reminders of the fragile nature of New Zealand’s native species, Reid’s prints focus on the vulnerability of its plants and animals, threatened by disease, loss of habitat and exotic predators. Reid studied at Christchurch Polytechnic School of Art, graduating in 2005. He has since worked as assistant to master printmaker Marian Maguire at PaperGraphica and exhibited widely throughout New Zealand since 2005.

On October 6 2019, it will be 250 years since the crew of the Endeavour and its captain, James Cook, sighted New Zealand. This moment has repercussions to this day and we need to acknowledge not only Captain Cook’s feats but the effect they have had on society in this post-colonial era… ‘in the wake of Captain Cook.

Was Cook a colonial hero or an imperial villain?

What is his environmental and cultural legacy?

What effect did the colonial sense of entitlement, our way is best, grating against long-held, harmonious traditions of indigenous peoples and their land have?

It is these questions that motivated me to create my latest series of work.

The collective title ‘mis-adventures’ is an edition of woodcut prints portraying a young Captain Cook. Each one has been manipulated to add, or subtract, from what Captain Cook stands for or represents, in my eyes.

As a series, the work portrays both “the view from the ship and from the shore”: how Cook was perceived by the British as well as the indigenous peoples of the lands he explored: this coming together of cultures, that began with Cook and has continued until this day.

“I don’t really like the word impartial but it is a word that may describe these works. I don?t want them to sit in the middle or on the fence, but more to say something about the strongly held feelings and opinions of each side.

Cook is a somewhat controversial figure: the first man to map the coastline of New Zealand and prove it was two islands, he also represents possession and dispossession to many people indigenous to the land he discovered.

The first encounter between Europeans and Tangata Whenua was marred by misunderstanding and resulted in the deaths of a number of M?ori, how this was portrayed in history for the next 250 years and how this will be viewed by us all, going forth:

I am convinced that Cook was a great man: his feats of navigation and the innovative way he looked after, and managed, his crew are legendary. Although influenced by the forces and attitudes of his time he showed great humanity to both his crew and the indigenous people he encountered.

Certainly, Cook was one of the great explorers of the 18th century. On the other hand, his voyages presaged the destruction of indigenous cultures and lands, through colonisation.

It’s surprisingly not Captain Cook, the man or his voyagers that have inspired these works but what I now believe Captain Cook to represent.

I didn’t want to just deface the portrait of Cook. I thought it important to create balance by adding things that also endorced him, his feats, his voyogues and his legacy.

“Red feathers were highly prized and traded among Pacific people. Cook was both gifted them and gave them, this is shown in the work ‘Mataku no te pupu IV’

The words ‘mataku no te pupu’ translates in English to ‘we are afraid of guns’.

Maori often cried this out after seeing first hand and hearing about the effective nature with which the spears of the white man killed.

‘Kaka ika uhi’ translates to ‘strike the black’ known to us all now as tattooing.

The word ‘tattoo’ derives from descriptions of the craft, given by Cook in his journals. He translated the native, Tahitian word ‘tatau’ as ‘Tattow’, which has morphed into the word we now use.

Interestingly, it is believed that Captain Cook never received any tattooing himself in contrast to many of his crew.

In history, European powers believed that if indigenous peoples occupied land but had not developed it in any significant way then, it could be considered

‘Terra Nullius’ or ‘nobody’s land’. They would assume first discovery and then, occupation.